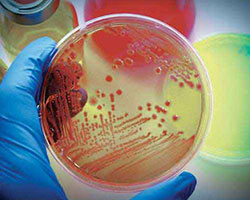 Candidiasis is an infection caused by a common type of fungus or yeast called Candida albicans, which is normally found in the mouth, skin, vagina, stomach, and intestines. Generally, the immune system controls it in the body, however, overgrowth of the fungus due to weakened immune system because of illness, and consumption of medications that kill some other harmless bacteria in the body, giving the Candida albicans. more room to grow, which might lead to this disease.

Candida infection in mouth is also called thrush, which causes throat pain, pain when swallowing, change in taste, nausea, and loss of appetite. It can spread further down the throat to the stomach. Whereas, Candida infection in vagina results in itching, burning, redness, and soreness in the genital area and a thick white discharge. The diagnosis of the disease is difficult as patients show different signals and symptoms according to age, gender, host resistance, and exposure to environmental factors. However, certain tools such as questionnaire, comprehensive digestive stool analysis (CDSA), and laboratorial techniques such as biochemical assays are used to screen and determine the presence of yeast infections.

A number of drug manufacturers are actively involved in the development of candidiasis therapeutics. For instance, Mycovia Pharmaceuticals Inc. is developing VT-1161, an orally-available inhibitor of fungal CYP51 for the treatment of recurrent vulvovaginal candidiasis. Mycovia completed phase IIb study of VT-1161 in December, which showed that VT-1161 was very well tolerated and had potent activity against a range of Candida species, including Candida glabrata, which has shown the resistance to other antifungal agents such as fluconazole.

Positive clinical trial results and adoption of collaboration strategies are enhancing candidiasis therapeutics pipeline. Moreover, the issuance of patents helps in achieving different milestones in the form of grants and designations from regulatory bodies and institutes, including the U.S. Food and Drug Administration (USFDA), the European Medicines Agency (EMA), and the National Institutes of Health (NIH), among others.

As of March 2019, the candidiasis therapeutics pipeline comprised 25+ drugs in different stages of development.

The report provides epidemiology forecast of candidiasis for seven major markets, such as the U.S., Japan, and EU5 countries (the U.K., Germany, France, Italy, and Spain). It covers prevalent population and treated patient population for the period 2016–2028. According to an article published in The Lancet 2018, 75% of women develop vulvovaginal candidiasis (thrush or yeast infection) at least once in their lifetime.

Some highlights of the report “Candidiasis Therapeutics – Pipeline Analysis 2019, Clinical Trials and Results, Patents, Designations, Collaborations, and Other Developments” have been mentioned below: