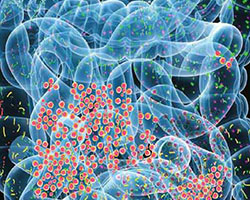 Diabetic foot ulcer is a serious condition that occurs due to diabetes. It can be defined as ulceration in foot along with neuropathy or peripheral artery disease of the lower limb in diabetic patients. Neuropathy has the highest effect on diabetic foot pathology, as it leads to sensory and autonomic dysfunction. Sensory dysfunction results in lack of protective sensation, which is a primary risk factor for ulcer development; whereas, autonomic dysfunction leads to drying of skin due to lack of normal glandular function. This results in increased mechanical and axial stress on skin that is more prone to injury due to drying. It has been observed that the majority of foot and lower leg amputations are performed on patients with diabetes mellitus.

Some of the other risk factors associated with the disease include uncontrolled hyperglycemia, poor blood circulation, and nutrition. Diabetic angiopathy is another risk factor for developing diabetic foot ulcer and related infections.

According to Infectious Disease Society of America (IDSA) and the International Working Group on the Diabetic Foot (IWGDF), diagnosis and treatment of this disease varies based on its signs and symptoms. Diabetic foot ulcer can diagnose by physical examinations followed by radiography, magnetic resonance imaging (MRI), and bone scanning. Furthermore, diabetic foot ulcer can be treated either operative or non-operative procedure. Operative procedure includes ostectomy, Syme amputation, and partial calcanectomy; whereas, non-operative procedure includes wound care and total contact casting.

A number of drug manufacturers are actively involved in the development of diabetic foot ulcer therapeutics. For instance, in June 2018, Remedor Biomed Ltd. completed phase II trials of a hydrogel containing erythropoietin to treat diabetic foot ulcer. Similarly, Charsire Biotechnology Corp., in collaboration with ASKLEP Inc., is conducting phase II studies to evaluate the efficacy and safety of CSTC1 in patients with diabetic foot ulcer.

Positive clinical trial results and adoption of collaboration strategies are enhancing diabetic foot ulcer therapeutics pipeline. Moreover, the issuance of patents helps in achieving different milestones in the form of grants and designations from regulatory bodies and institutes, including the U.S. Food and Drug Administration (USFDA), the European Medicines Agency (EMA), and the National Institutes of Health (NIH), among others.

As of March 2019, the diabetic foot ulcer therapeutics pipeline comprised 10+ drugs in different stages of development.

The report provides epidemiology forecast of diabetic foot ulcer for seven major markets, such as the U.S., Japan, and EU5 countries (the U.K., Germany, France, Italy, and Spain). It covers prevalent population and treated patient population for the period 2016–2028. According to the prevalence data from the International Diabetes Federation, between 9.1 million to 26.1 million people with diabetes worldwide were affected by diabetic foot ulcers in 2015.

Some highlights of the report “Diabetic Foot Ulcer Therapeutics – Pipeline Analysis 2019, Clinical Trials and Results, Patents, Designations, Collaborations, and Other Developments” have been mentioned below: