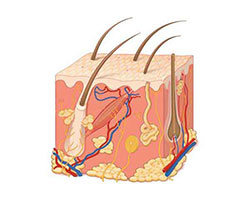 Psoriasis is a medical condition that includes chronic inflammation and scaling on skin and develops when skin cells rapidly grow below the surface of the skin and get deposited on the surface before they get mature. Usually this process takes about a month, but in psoriasis it may occur in few days. Psoriasis leads to the development of thick patches of inflamed skin with a silvery scale covering. These patches are also referred to as plaques and they itch or feel sore. They mostly occur on knees, elbows, other parts of the legs, lower back, scalp, soles of feet, face and palms. Psoriasis can also affect toenails, fingernails, inside the mouth and soft tissues of genitals. Pain and itching may interfere with basic functions such as self-care, sleep, and walking.

Psoriasis is caused when the T-cells accidently get involved and become active that they trigger other immune responses, thus, resulting in inflammation and rapid turnover of skin cells. Another major source of developing the disease is its presence in the family history of an individual. There are several forms of psoriasis, including guttate psoriasis, plaque psoriasis, erythrodermic psoriasis, inverse psoriasis, pustular psoriasis, and psoriatic arthritis. Conditions such as psoriatic arthritis, cardiovascular problems, obesity, high blood pressure, and diabetes are more likely to develop in a person with psoriasis.

In February 2018, the U.S. Food and Drug Administration (USFDA) approved COSENTYX (Novartis AG), a subcutaneously administered human interleukin-17A antagonist, for the treatment of plaque psoriasis, psoriatic arthritis, and ankylosing spondylitis. In 2016, TALTZ drug (Eli Lilly and Company) was approved by the USFDA to treat plaque psoriasis.

A number of drug manufacturers are actively involved in the development of psoriasis therapeutics. For instance, MC2 Therapeutics A/S is developing MC2-01, a topically administered cream for the treatment of patients with psoriasis vulgaris. The top-line results from phase III clinical trial comparing MC2-01 to Taclonex, a topical suspension of vitamin D analog and corticosteroid, in adults with psoriasis, showed that MC2-01 cream was statistically superior in both treatment success and patient reported treatment convenience compared to Taclonex. Also, the study met both the primary and secondary endpoints.

Positive clinical trial results and adoption of collaboration strategies are enhancing psoriasis therapeutics pipeline. Moreover, the issuance of patents helps in achieving different milestones in the form of grants and designations from regulatory bodies and institutes, including the USFDA, the European Medicines Agency (EMA), and the National Institutes of Health (NIH), among others.

As of March 2019, the psoriasis therapeutics pipeline comprised 150+ drugs in different stages of development.

The report provides epidemiology forecast of psoriasis for seven major markets, such as the U.S., Japan, and EU5 countries (the U.K., Germany, France, Italy, and Spain). It covers prevalent population and treated patient population for the period 2016–2028. According to American Academy of Dermatology in 2018, psoriasis affected more than 125 million people worldwide.

Some highlights of the report “Psoriasis Therapeutics – Pipeline Analysis 2019, Clinical Trials and Results, Patents, Designations, Collaborations, and Other Developments” have been mentioned below: