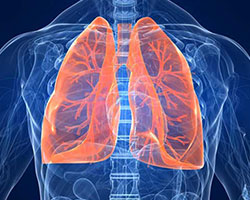 Bronchiectasis affects lungs, and leads to excess accumulation of mucus due to thickening and widening of alveolar walls. Some of the most common symptoms of bronchiectasis are breathlessness, mucus coughing, tiredness, fever, chills, and wheezing sound on breathing. Some common causes of the disease include cystic fibrosis, immunodeficiency diseases (HIV/AIDS), chronic obstructive pulmonary disease (COPD), and conditions that affect cilia. The usual risk factors for the disease include dysfunctional cystic fibrosis transmembrane conductance regulator (CFTR) protein, and chronic or severe lung infections. This disease occurs in patients with cystic fibrosis, and is also associated with systemic diseases, including tuberculosis.

Computerized tomography (CT), X-ray, blood tests, and lung function tests are some of the most common diagnostic procedures for bronchiectasis. The disease can be managed through medications, antibiotics, and exercises. In case of ineffective medication treatment, surgery is considered, which involves the confinement of infection to particular area.

Additionally, the issuance of patents helps in achieving different milestones in the form of grants and designations from regulatory bodies and institutes, including the U.S. Food and Drug Administration (USFDA), the European Medicines Agency (EMA), and the National Institutes of Health (NIH).

As of March 2019, the bronchiectasis therapeutics pipeline comprised 10+ drugs in different stages of development.

The report provides epidemiology forecast of brochiectasis for seven major markets, such as the U.S., Japan, and EU5 countries (the U.K., Germany, France, Italy, and Spain). It covers prevalent population and treated patient population for the period 2016–2028. Although, there is limited prevalence data on bronchiectasis, a population-based study published in the SAGE journals and conducted in the U.S. in 2013 estimated the prevalence of bronchiectasis to be around 139 cases 100,000 persons. Higher incidence of bronchiectasis was found in women when compared to men and is subjected to increase substantially with age.

Some of the key players involved in the development of bronchiectasis therapeutics are Aradigm Corporation, Bayer AG, Santhera Pharmaceuticals Holding AG, Insmed Incorporated, Zambon S.p.A., Alitair Pharmaceuticals Inc., and others.

Some highlights of the report “Bronchiectasis Therapeutics – Pipeline Analysis 2019, Clinical Trials and Results, Patents, Designations, Collaborations, and Other Developments” have been mentioned below: